The Cure For Bad Opinion Polls

For the past 80 years since its modern inception,  opinion polling has been either praised or scoffed at depending on who’s winning of course. They drive and steer politicians who care about keeping their jobs. Consumer habits, religious affiliation, education and more are also a part of polling. These other bits of information can be very useful like increasing efficiency in an advertising budget for a company/campaign or where to better allocate valuable resources for generating more income.

Opinion polling with bad information however, whether it’s by incompetence or deceitfulness, can paint an inaccurate picture of what people think through a light that may not necessarily be the case. It attempts to artificially sway public opinion. Most of the time, biased polls don’t work. And the few times that it does work (just read about Lee Atwater and his push polls, among the other things he did), the perpetrators do not fare well in the end.

Inaccurate polling didn’t sway voters from electing Harry Truman to his first full term as President in 1948, and the press got some egg on their faces.

Who also could forget the botched exit polls and the early call in the 2000 Florida race for Al Gore. (skip to 2:47)

This year has shown to be one of the most ugly and polarizing presidential races since Andrew Jackson vs John Q. Adams in 1828 and again in 1832 in Jackson’s bid to “kill the Bank”. Even the media cannot hold their biases to themselves anymore. The L.A. Times allowed an editorial piece recently saying that the press has discarded objectivity altogether in an attempt to attack the GOP nominee. And the New York Times has removed all doubt.

False reports of Trump within the past week alone being bribed $150 Million to leave the race, campaign insiders furious about messaging, and such like…

We can now see evidence of this bias being expressed in the mainstream opinion polling. When the Republican National Convention concluded, Donald Trump had pulled into the lead ahead of Hillary Clinton for the very first time. 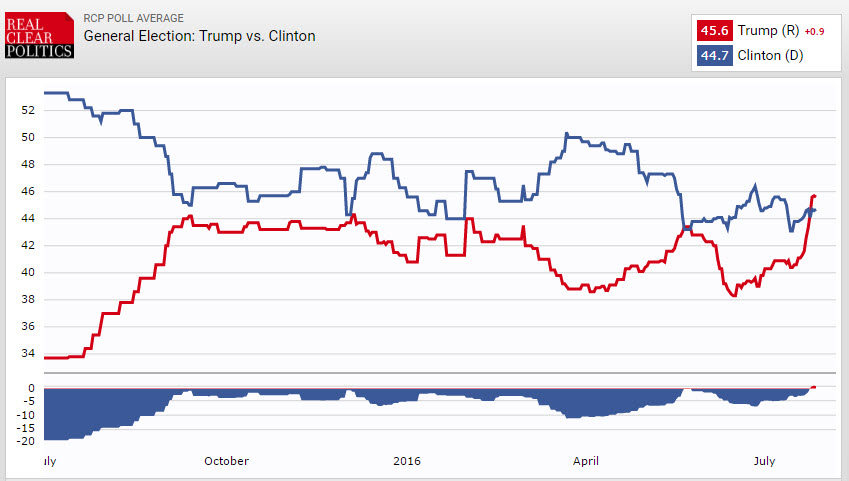 Shorty thereafter, Reuters retroactively changed their methodology into how they would track the presidential race:

In a presidential campaign notable for its negativity, the option of “Neither” candidate appears to be an appealing alternative, at least to participants in the Reuters/Ipsos opinion poll.

Many voters on both sides have been ambivalent in their support for Democratic nominee Hillary Clinton and Republican nominee Donald Trump, complicating the task of the pollsters trying to track the race.

That sentiment may help explain an apparent skew that recently emerged in the Reuters/Ipsos poll results. Given the choice, a relatively large group of voters opted for “Neither/Other” candidate compared with other major polls, leading to an underreporting of several percentage points for one or other of the two major contenders at times in the race.

As a result, Reuters/Ipsos is amending the wording of the choice and eliminating the word “Neither,” bringing the option in line with other polls.

The result was an artificial 5.7% swing in favor of Clinton.

Other polling has gotten so lazy and poor in other places that they can publish with a straight face that Trump is behind Hillary in a reliably red state like Georgia. A ridiculous and absurd notion, considering the fact that:

1. The GOP participation in the March 1 Presidential Primary dominated the Democrats as shown below. All Republican candidates account for 63% of the total votes cast. (Source: The Green Papers, Redd Group Research)

2. A party ID survey published just one year ago by Gallup, showing that Republicans had a 3.9% advantage among likely voters in the state, not a 2.4% deficit as the AJC shows, a 6.3% overall swing within a year if that were true.

3. The AJC polling report weighted the poll to have more Democrats than Republicans surveyed. Hardly an oversight. (key numbers circled for emphasis)

They might as well have went into a room somewhere, made up some numbers and come back fifteen minutes later with a cheap 1-paragraph “report” that showed Hillary with a 4-point lead in Georgia and save them the money.

The cure for faulty polls of course is the truth. An honest and accurate poll regardless of where one’s personal bias resides because reputation, integrity, and credibility stand above cheap data fudging to reverse-engineer a desired narrative.

The Redd Group prides itself in keeping a fair and accurate tracking poll methodology, targeting the most accurate universes of likely voters and weighing the demographics accordingly. Click here to see a sample poll report that we put out. They’re simple, straight-forward and easy to read. We at The Redd Group also offer other services that you can check out.

We leave you with this quote…

…For from that scrutiny comes understanding; and from that understanding comes support or opposition. And both are necessary. I am not asking your newspapers to support the Administration, but I am asking your help in the tremendous task of informing and alerting the American people. For I have complete confidence in the response and dedication of our citizens whenever they are fully informed.

I not only could not stifle controversy among your readers–I welcome it. This Administration intends to be candid about its errors; for, as a wise man once said: “An error doesn’t become a mistake until you refuse to correct it.” We intend to accept full responsibility for our errors; and we expect you to point them out when we miss them.

Without debate, without criticism, no Administration and no country can succeed-and no republic can survive. That is why the Athenian law-maker Solon decreed it a crime for any citizen to shrink from controversy. And that is why our press was protected by the First Amendment–the only business in America specifically protected by the Constitution–not primarily to amuse and entertain, not to emphasize the trivial and the sentimental, not to simply “give the public what it wants”–but to inform, to arouse, to reflect, to state our dangers and our opportunities, to indicate our crises and our choices, to lead, mold, educate and sometimes even anger public opinion….

And so it is to the printing press–to the recorder of man’s deeds, the keeper of his conscience, the courier of his news–that we look for strength and assistance, confident that with your help man will be what he was born to be: free and independent.